The Spider Incident - A Horrifying Lesson in Lawn-care

Jason and Tim refuse to believe that the following story is true - whatever helps them get to sleep at night. I swear to you, though, that the following account is 100% accurate. Unfortunately, it is also at least 97% frightening, so those with arachnophobia and small insects may want to avert their eyes from this comic strip.

It all started when I was weed eating around the perimeter of the Schmit Home Solutions shop yesterday afternoon...

SCENE ONE: It was a pleasant day, the sun was shining and a nice cool breeze was blowing. I had just finished mowing the lawn and was taking care of some tight spots that I had missed around the building with the weed eater.

SCENE TWO: I notice something peculiar. A large crowd of menacing black spiders are crawling along the grass line. They seem to have been awoken by the weed eater and are now emerging from their homes in the underworld.

SCENE THREE: Against my better judgement, I continue to weed eat. The gigantic, ugly arachnids are swept up by the weed eater and flung at top speeds in what seems to be a million different directions.

SCENE FOUR: I was wrong about the "million different directions", the demonic beasts have all ended up on my legs. Immediate panic ensues.

In case you were concerned, I did survive this episode (barely). I'm hoping to dream up a solution to this problem, because the grass outside is still growing, and I have a feeling that there will be a repeat event in about one week. Ugh.

Character of the day: Krampton the Krill.
A very small and inquisitive creature, Krampton the krill spends most of his time opening his large eyes as widely as possible so as to learn all he can about his surroundings. 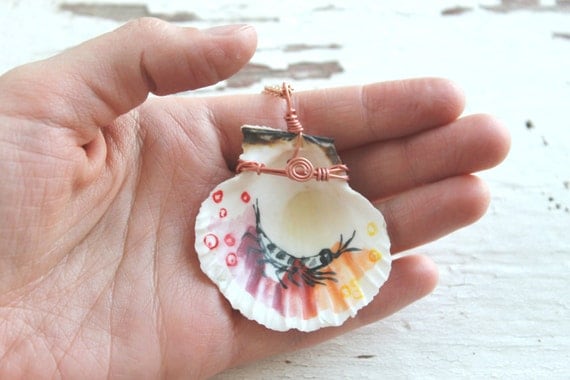