Aquatic Avenue - An Introduction and Braily the Orca

Every time I paint one of my sea creatures onto a shell, I imagine a story - a personality, a set of hobbies and an entire life that the creature lives. Recently, Jason has convinced me to share these stories. I'll be slowly posting them here, but first a little back story to get you set up for character introductions.

All of my watercolor shell sea creatures are neighbors living somewhere in the vicinity of Aquatic Avenue (which is essentially Main Street in their small undersea town.) Their interactions are mostly amicable, but of course, no neighborhood would exist without the occasional squabble amongst friends. One thing they all agree on, though, is the enemy - sharks and the fairly uncommon, but still frightening, deep sea fishing lure.

So, I'll begin with my character of the day: Brailey the Orca whale.

Brailey is an orca, often referred to as a killer whale. Curiously enough, however, she is a strict vegetarian and an active member of Save Our Neighbors (SON), an organization that concerns themselves with helping sea lions evade death by orca and shark consumption. 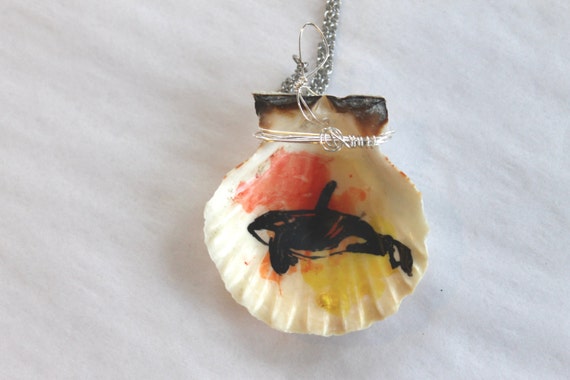